An Introduction to the breed 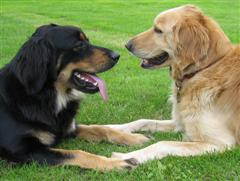 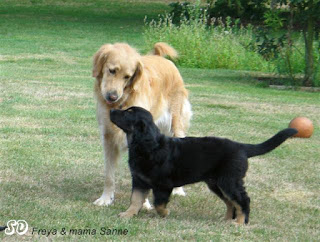 The translation of name Hovawart tells of the most important work or task he had to fulfil "Guardian of the property", the estate, farm, house and all its inhabitants. The Hovawart belongs to a very old group of working dogs that were found all over the middle European countries, whose task was to guard the master's properties against human or animal aggressors. Therefore, the Hovawart had to be of medium height, large rather than fast. His job was supervising and controlling, and he had to do this independently so he needed a good measure of self-reliance and a good sense of discrimination. 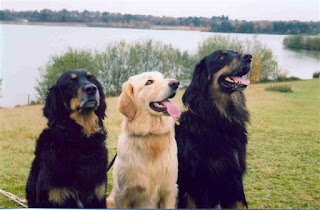 The Hovawart is a naturally beautiful dog, with no part exaggerated. Three colours are permitted; Black, Blonde, or Black & Gold; all colours can occur in the same litter depending on the colours of the ancestors. Today the Hovawart is a medium sized impressive dog which should not be heavy. He has drop ears and a longish coat. The differences between Dogs and Bitches are clearly visible in their appearance.


The Hovawart is a hardy dog, inured to all weathers, intrepid, watchful, agile and swift and should NOT be nervous. He is very affectionate, intelligent and naturally obedient ..... although resistant to serious training at a early age as the Hovawart tends to retain his lively, good natured puppy-hood until he is at least two years old. Their most important asset is a stable character and temperament, displaying playfulness, curiosity, fearlessness and the desire to chase. 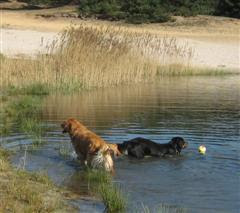 The Hovawart is, and should remain a family dog and companion; a sociable faithful companion that wants to be by your side. They are friendly dogs and do not forget friends or enemies - once a friend, always a friend. Hovawarts are not suited to a kennel life.

One of the features which makes the Hovawart stand out from virtually any other breed, is the fact that from the start his character, temperament and health was more important than his looks.

The Hovawart was, and still is, bred to be a reliable intelligent companion suited for all kinds of work, be it the guardian of the property; working with the police; tracking; agility; search and rescue or whatever work there is to do for a dog nowadays. Hovawarts love, above all else, to do something with or for their owner.

Hovawarts are an intelligent independent being, with a mind of their own, stemming from the time when they had to make all the decisions themselves. Hovawarts today can still think for themselves. The Hovawart can be wilful and dominant, understanding dominance and aggression will help owners integrate a new pup into their household. They must receive at least basic obedience training. After two years of age, serious (competitive) training can start.

Your Hovawart will have a quick and enquiring mind and needs at least a garden to keep him occupied. Forms of mental exercise and obedience classes are recommended. His willingness and quickness to learn are impressive.

Exercise as a puppy should be moderate, as he has big strong bones which need time to grow.
Agility classes and high jumps should be restricted until about eighteen months of age. 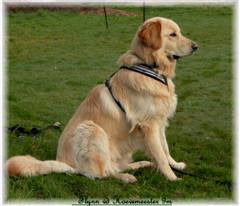 With regards to feeding, for their size they are moderate eaters, it is best to feed twice a day, young puppies of course need more feeds a day. Always feed the dog from a bowl which is positioned at chest height, this reduces over bending of the young legs and the risk of stomach torsions.

Grooming is also moderate in its requirements. His beautiful coat is soft and shiny, a daily brushing should only take a matter of minutes.


The historical evolution of the Hovawart is fascinating. The Hovawart is of very old ancestry and nearly did not survive as a breed. The Hovawart was rejuvenated in Germany, his country of origin, by zoologist Kurt F Konig who began his work around 1915. Kurt Konig crossed Hovawart type dogs with the Hungarian Kuvacz, Newfoundland's, German Shepherds, Leonbergers, a few Bernese Mountain dogs and a African Hunting dog (Sloughi type). In 1922 the first new Hovawart litter was registered in Germany and today the Hovawart is a popular breed there and in many other countries. 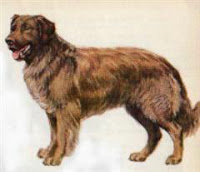 Hovawart of the older type

The breed as we know it today was not completely reconstructed since more than 50% of the dogs used were Hovawarts. The breeding programme was set up using Hovawarts and Hovawart type dogs as a foundation. Although zoologist Kurt Konig headed the reconstruction programme, he worked together with other breeders throughout Germany and Austria. Over a period of time, four regions became important as the foundation branches of all Hovawarts today.

- (2) The Hamburg - / Schleswig-Holstein breeding programme used just less than 60% Hovawarts, 20% GSD, 20% Newfoundlanders and Kuvacz. It was only in the Hamburg region that Tessa, an African Hunting type dog was used. Tessa's influence on the Hovawart is regarded as both negative and positive. Some of the Hamburger offspring were timid and flighty in character, 'leggy' and narrow in appearance. The Hamburger combinations also produced some rather sweet, soft dogs.

-(3) In the Oldenburger lines the Hovawart type was less than 50%, GSD around 25%, Newfoundlander 10%, and the rest was made up by the Kuvacz, which were used here in a higher percentage than any other region. Not surprisingly the Kuvacz influence can be seen strongly, especially in the blondes, who are generally light to medium gold in colour with very good dark pigment. 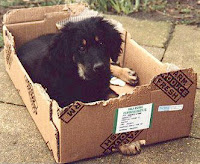 - (4) The Berlin region had the greatest variance in genetic structure. The Hovawart type swung between 40% and 70%, Newfoundlands 8 - 15% and the kuvacz and GSD's between 15 - 25%. Here at least 4% of the Hovawart breeding reconstruction involved Leonbergers. The so called "Wild colours" and "Berliner blond" (Leonberger influence) originated from this region. Wild colours and Berliner blonds can still be found today, although not recognised.


We hope this information goes some way towards answering your Hovawart questions.
Source: IHF Archive.
Source Translations by Hester Oxborrow.

Zuchwerte -The value of dogs


The estimated breeding value of dogs ("Zuchtwert") has nothing to do with money but with the virtues of an individual dog; it aims to describe numerically how an animal will pass it's characteristics on to any progeny.

In the last century, some German Hovawart breeders together with their breed club Rassezuchtverein f|r Hovawart-Hunde (RZV) and the International Hovawart-Fvderation (IHF) realised that just breeding beautiful Hovawarts and Champions was not good enough.

Health, longevity, and socially acceptable behaviour had become far more important. Today it is a 'must' to introduce new breeding methods for serious dog breeding.

The concept of "zuchtwerten", (breeding values) is still relatively new within the dog-breeding world. The method of BLUP ("Best Linear Unbiased Prediction") is used, which originated from livestock production.

The job of valuing a dog is complicated. The method of estimated breeding values combines all information from all ancestors (parents, aunts, uncles, grandparents), siblings and the offspring. The 'genetic value' is the result.

Breeding values are estimated normally by traits, which are polygenic (a characteristic controlled by more than one gene)and are expressed in numeric the form. The RZV specifically collects 'Zuchtwerte' for the following categories:

The value of a dog can go up or down, it is a continual calculation and updating of facts. For example. The brother of dog (A) produces a puppy with, say an HD problem, the breeding value 'Zuchtwert' for HD of dog (A) will go up (negative weighting); and indeed the score of the dog who produced the puppy with HD will go up even more.

The BLUP method of valuing a dog is important for the future of the breed. The information can help a breeder put a lot into perspective. With factual knowledge of your own dog's value, a more suitable mate, aimed at producing healthier and better dogs for the future can be found.

Knowing objectively more about a dog's Zuchtwert and being able to put the facts together should give us a greater understanding.

Every dog has it's good points and sure enough, no dog is perfect, there are no perfect bloodlines and puppies with defects will be born.

It is important to remember that although estimated breeding values and Zuchtwerte numbers can tell us a lot about special traits in a bloodline, they can also tell us very little if only a few dogs of a line have been tested, or when information has not been passed on.

This is partly why the official Hovawart Breed Clubs and the IHF wish to receive complete and correct information regarding, Health, Character and Breed-type. Source: IHF 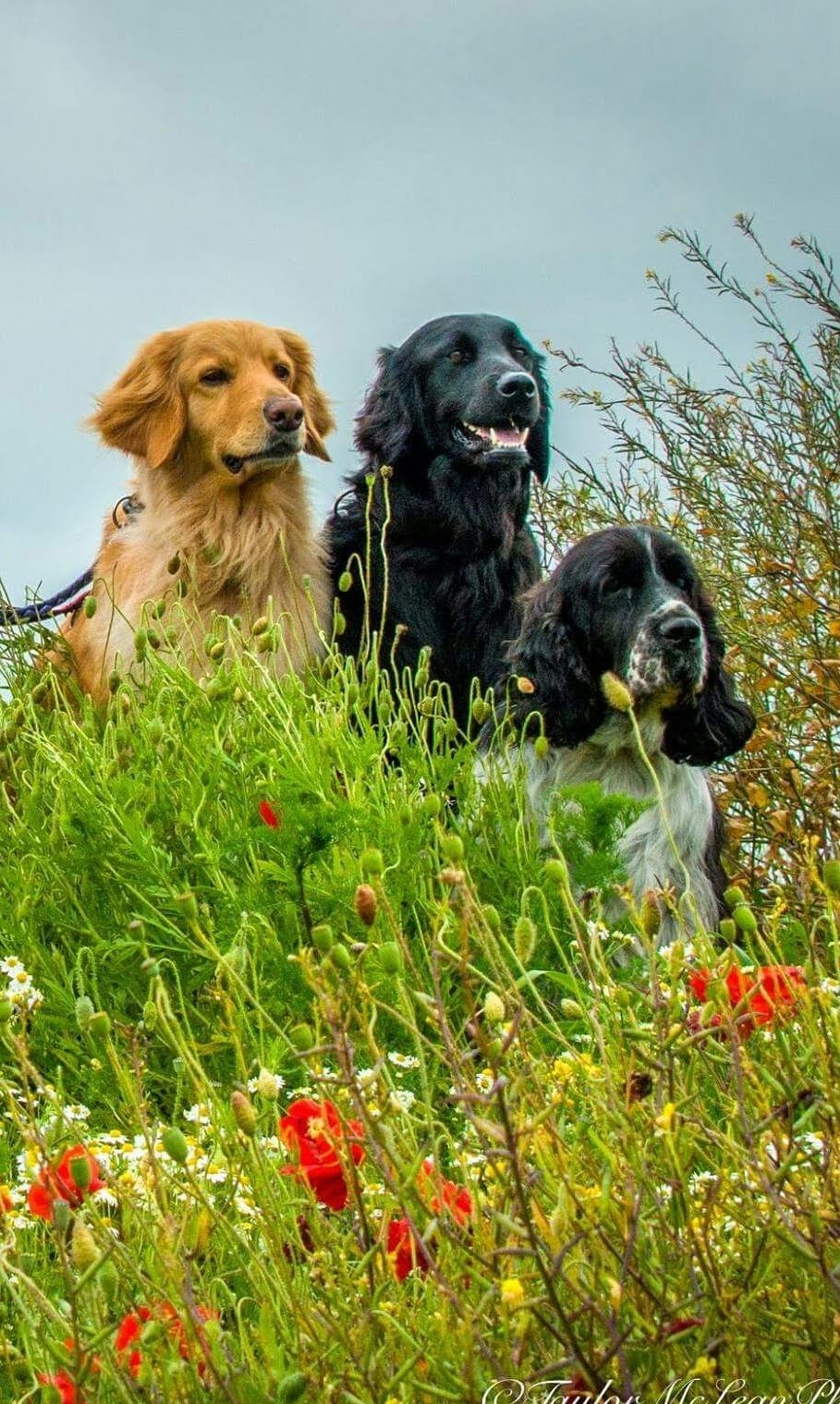